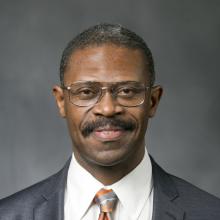 J. Lorand Matory is the Director of the Center for African and African American Research at Duke University, where he is also the Lawrence Richardson Professor of Cultural Anthropology.  For the prior eighteen years, he had served a Professor of Anthropology and of African and African American Studies at Harvard University.  He has conducted intensive field research in Brazil, Nigeria, Benin Republic, Trinidad, Jamaica and the US.

Choice magazine named his Sex and the Empire That Is No More: Gender and the Politics of Metaphor in Oyo Yoruba Religion an Outstanding Book of the Year in 1994, and his Black Atlantic Religion: Tradition, Transnationalism and Matriarchy in the Afro-Brazilian Candomblé received the Herskovits Prize for the best book of 2005 from the African Studies Association. In 2010, the American Anthropological Association honored him with the Distinguished Africanist Award.  And, most recently, he received the Alexander von Humboldt Research Prize, a recognition of lifetime achievement conferred by the German government and intended to foster collaborations between leading German and non-German scientists.

He is the author of over 20 articles in peer-reviewed journals or edited volumes.  In 2008, Professor Matory delivered the Lewis Henry Morgan Lectures, which will be published under the title Stigma and Culture: Ethnological Schadenfreude and Last-Place Anxiety in Black America (in press, University of Chicago Press).  With the support of the Humboldt Prize, he has begun a long-term collaboration with the Ethnological Museum and the Lateinamerika-Institut of the Freie Universität Berlin related to the documentation and analysis of the Afro-Atlantic sacred arts.  During his stint in Germany, he also completed a book called Marx, Freud and the Gods People Make in the Black Atlantic: the Real-Life “Fetish” in the Making, and the Critique, of European Theory.  The manuscript is currently under review for publication.

In support of his research and public educational projects, he has also received grants and fellowships form the National Endowment for the Humanities, the Social Science Research Council, the National Science Foundation, and the US Department of Education (Fulbright-Hays Fellowship).

From 2003 to 2011, he served as a member of the Presidential Advisory Committee on Cultural Property at the US Department of State.  He is also the Executive Producer of two films: “Can We Talk?: Bridging the Social Science and the Humanities” (2012), “Human Traffic: Past and Present” (2012), “Global Affirmative Action in a Neoliberal Age” (2013), and “Lucumí Music: Singing, Dancing and Drumming Black Divinity” (2015), all of which are available for viewing on the Web site of the Center for African and African American Research.

Brian C. Smithson is a Ph.D. candidate in Cultural Anthropology at Duke University. His research focuses on the efforts of Bénin's Yorùbá-speaking media creators to build up a local film industry by drawing upon various financial, historical, and symbolic resources. He is particularly interested in the ways these Yorùbá producers harness local religious histories, symbols, and practices to establish the look and feel of their films as being both distinctively Yorùbá and distinctively Beninese, a positioning that allows them to seek financial and material support from both the government of Bénin and the more robust "Nollywood" film industry of neighboring Nigeria.

Brian earned his master's degree in African Studies from UCLA in 2011, where he focused on the religious and political visual cultures of Cameroon. While at UCLA, he served as a museum educator at the Fowler Museum in Los Angeles. He has also worked as a graphic designer and studio artist in his home state of Louisiana.

Christina Lan is a senior at Duke University studying Economics and Markets and Management. She's passionate about the arts, entrepreneurship, and social justice and aims to create a lifelong profession that encompasses all three. Especially for the arts, she's an avid supporter of using the arts as an educational medium and activist platform. During her time at Duke, she has been involved with Small Town Records, WHO Speaks, Bass Connections, and the Chronicle. She will be graduating in May and is excited for the roller coaster that comes post-graduation.

Jerry Blow, AIAP, is an Architectural Photographer based in Raleigh, North Carolina. His education has included a degree in Aerospace Engineering from the University of Virginia, a degree in photography from the Smithsonian Institution, and studies in architectural photography at Harvard's Graduate School of Design. His photographs have helped his design and construction clients win numerous awards. For over a decade, he worked as the photographer for the Ackland Art Museum at the University of North Carolina, Chapel Hill, where he photographed many sculptural pieces from around the world. Jerry is married with two sons.

Bryce Lankard is a native of North Carolina, and a UNC-Chapel HiIl alumnus. He has been immersed in photography his entire adult life. In addition to being an editorial and fine art photographer he has also served in the roles of Art Director, Photo Editor, Educator, Curator and Principal Photographer, from New Orleans to New York City. In 1995 he was a co-founder of Tribe Magazine in New Orleans and served as Creative Director for the celebrated publication. He went on to work for 9 years in New York City, but in late 2006, following Hurricane Katrina, he returned to New Orleans and co-founded the non-profit New Orleans Photo Alliance. He forged the NOPA mission to create opportunities for the vibrant but neglected photography community in the Gulf South and to provide education and exposure to both the public and practitioners of the medium. Returning to North Carolina in early 2009 he has continued to share his knowledge by teaching and lecturing at venues such as UNC, the Gregg Museum, the Art Institute, the Light Factory, the ArtsCenter and Duke's Center for Documentary Studies.

Throughout all this he has continued to challenge himself creatively with new work, exploring the language of photography and has exhibited the results internationally to critical acclaim. His latest was a collaboration with the 5 photographer "Posse" at the SlowExposures festival that has chose southern literary icon, Flannery O'Connor and her themes, as a guiding light.. He is honored to have had his work appear alongside legends such as Robert Frank, Henri Cartier-Bresson, Cindy Sherman, Bruce Davidson, and Andres Serrano in galleries and publications in Spain, Germany, France and throughout America. HIs work was featured in the the Light Factory's "Romance of the Road" exhibition. Various projects have been highlighted in magazines such as Fraction, Square and Fine Art Photo and he has made three appearances in SXSE magazine.