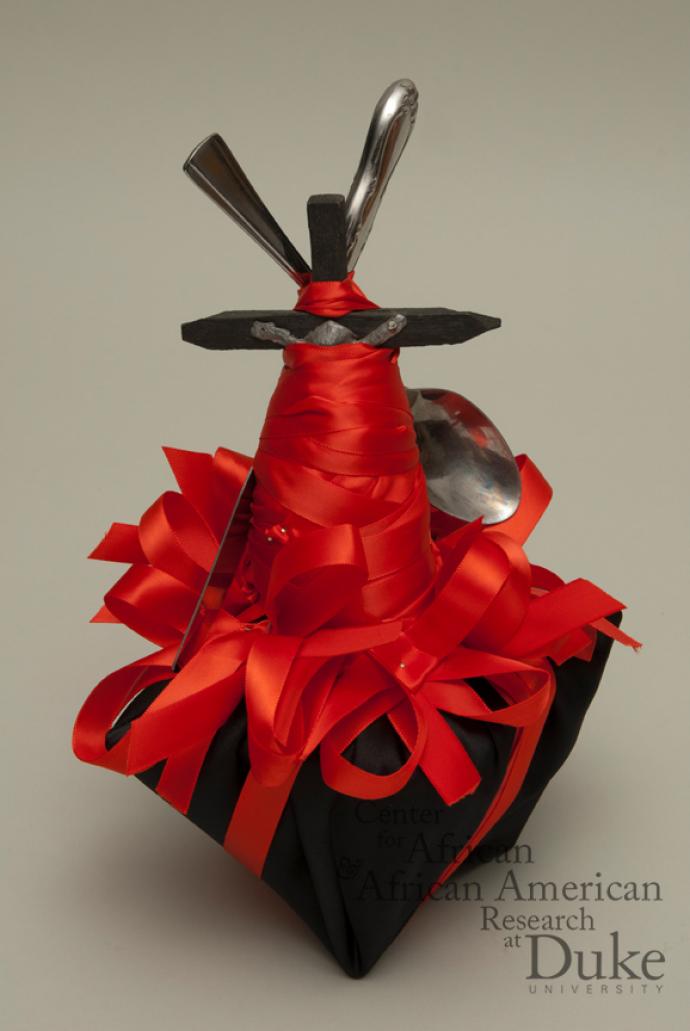 Vodou is a religion of song, dance, prayer, spirit possession, animal sacrifice and healing practiced by the majority of the Haitian people and by many in the Haitian diaspora. Its roots lie in the Atlantic slave trade, which took hundreds of thousands of kidnapped western Africans to labor on the sugar plantations of Saint Domingue, as well as the survival strategies and creative energies of a post-revolutionary people. Most vodouisants, or practioners of this religion, are also Roman Catholic. Among the most spectacular expressions of its tradition of plastic arts are sequined flags in honor of the gods, or lwa; sequined bottles from which the gods drink their favorite spiced liqueurs; pakèt kongo, or cloth bundles that rouse the power of the gods; and asson, the beaded gourd rattles that are the insignia of the authority of the manbo (priestesses) and the houngan (priests). The preeminent Rada phalanx of deities draws its collective name from the Fon-speaking city of Allada, and many of these deities, such as Damballah and Loko, have clear counterparts in West Africa, in the Arará “nation” of Cuban Santería, and in the Jeje “nation” of Brazilian Candomblé. On the other hand, the fiery Petwo phalanx of Haitian gods is more closely associated with the experience of slavery and rebellion in Haiti. In truth, the entire spectrum of Haitian and Haitian-American divinities draws on symbolic resources from West-Central Africa and Europe as well, and the sacred arts of Vodou assemble not only Haitian-made objects, such as earthenware vessels, but also goods imported from as far away as India, such as the beads preferred in the necklaces and the asson that signal the authority of the priests.